As more details emerge of the Boston Marathon attack, authorities have said an eight year old boy, Martin Richard, was killed in the blasts. His mother and sister were also seriously injured.

The bombs exploded 4 hours into the marathon, turning the carnival atmosphere into one of terror. Bostonians had turned out on their public holiday to mark Patriots Day, which remembers the first battles of the American War of Independence.

Spectators were cheering as runners finished the race. The final mile had been dedicated to the victims of the Sandy Hooke Elementary School shooting, and some of the families were sitting near the finish line.

There are early reports coming out of Fox News that the FBI are searching an apartment in a suburb of Boston, with speculation that those responsible could have links to the Pakistani Taliban.

Two people have been killed and at least 100 injured after two explosions occured at the finish line of the Boston Marathon. Some of those injured have lost limbs in the blasts. A third explosion was reported outside the JFK library in the city.

The explosions happened at 2:45pm local time, two hours after the first of the 27,000 competitors crossed the finish line.

Authorities say they knew of no security threats prior to the marathon, and are investigating the attack. Washington DC and New York have been placed on high alert.

A series of explosions erupted near the finish line at the Boston Marathon on Monday. The Boston Police Department confirmed that they were looking into an explosion, but had no further comment.
The explosions at the Boston Marathon went off more than four hours after the start of the men’s race, which meant that there were still several thousand runners yet to finish the race.
The Associated Press reported that the authorities were helping injured runners leave the scene and bloody spectators were being carried to a medical tent that was being used for runners.

via Explosions Reported at Site of Boston Marathon – NYTimes.com.

The world’s tax havens must be “eradicated” and French banks must declare all of their subsidiaries, declared French President Francois Hollande today.

Presenting a draft law “moralising” french public life, he also has demanded that all 37 ministers disclose their personal wealth and assets by this Monday, following the recent tax fraud scandals by leading government figures in France.

As his popularity since election last year dwindles, President Holland said French banks “will have to publish every year the full list of their subsidiaries in the world, country by country”. “They will also have to explain their business”, he said.

“In other words it won’t be possible for a bank to hide transactions carried out in a tax haven.”  In addition, “a high-level authority will be created to monitor the assets and interests of ministers, members of parliament and top elected officials“, he said.

Mr Hollande said a new national, specialist prosecutor would focus on corruption, with tougher penalties for those found guilty of fraud.

The banking system across Europe is being shaken once again, following recent banking scares in Cyprus, where Russian investors lost billions of Euros deposited in Cypriot banks. The government decided on an immediate tax on all accounts over 100,000 Euros and banks closed for a whole week while they negotiated an EU bailout deal, to prevent a run on their banks.  Some sources claimed Cyprus was a “tax haven” and a “money laundering” center, though today Cyprus announced citizenship rules are to be relaxed in Cyprus to encourage foreign investors who lost 3 million Euros under the Cyprus EU bailout deal last month.

The reaction of the french banks, and the rest of the corporate world, to Francois Hollande’s proposals will make interesting reading over the next few days.

Alternative for Germany wants the euro abolished, with states returning to their original currencies.

But analysts say it could skim enough votes from Chancellor Angela Merkel’s Christian Democrats to make it harder for her to retain power. 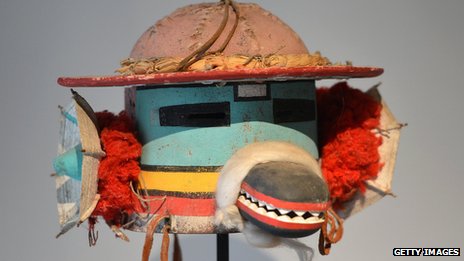 A mask from a native American tribe in Arizona has fetched 160,000 euros (£135,000) at auction in Paris, more than three times the pre-sale estimate.

Friday’s auction of 70 masks fetched some 930,000 euros after a legal challenge to stop the sale failed.

Lawyers for the Hopi tribe had asked for the auction to be cancelled on the grounds that the masks must have been stolen from the tribe.

It considers them sacred and blessed with divine spirits.

Auctioneers, however, say the masks had been bought and sold in the past and were legally acquired.

They said blocking the sale would have implications for the trade of indigenous art and could potentially force French museums to hand back collections they have bought.

The masks – mysterious looking faces fashioned from wood, leather, horse hair and feathers, and painted in a vivid array of colours – are spiritual artefacts thought to have been taken from a reservation in northern Arizona in the 1930’s and 40’s.

To Hopi Indians they are sacred – tools through which the living can communicate with the spirits of the dead.

A Florida father says he was shocked to find a note in his fourth-grade son’s backpack suggesting that his teacher instructed students to write letters on their willingness to give up their constitutional rights.

What does the federal hate crimes law inspired by the murders of Matthew Shepard and James Byrd Jr. have to do with an internal dispute among the Amish in which the beards of men and the hair of women were forcibly sheared?

“The scissors used to cut the hair were manufactured in one state and used in another,” explained Edward Bryan, defense lawyer for Amish bishop Samuel Mullet Sr., who was sentenced to 15 years in federal prison.

Vice President Joe Biden and his wife, Dr. Jill Biden, took in $26,400 in 2012 by renting a cottage on the property of their Delaware home to the Secret Service, tax records released by the White House revealed.

Mario Soares, who led Portugal to democracy in the 1970s after the Salazar dictatorship, has called on the government to default on its debts. The economic pressure on Portugal has been mounting in recent weeks, and the nation is losing patience with the EU imposed austerity. The Portuguese are looking at the death spiral in Greece, caused by their various rounds of bailouts and austerity.

Soares told Portuguese television channel Antena 1, “Portugal will never be able to pay its debts, however much it impoverishes itself. If you can’t pay, the only solution is not to pay. When Argentina was in crisis it didn’t pay. Did anything happen? No, nothing happened”.

Last week Portugal’s top court ruled that the government’s decision to slash pension payments and public sector wages was illegal. The ruling means the government is struggling to find the budget cuts required from elsewhere.

Portugal received an EU/IMF bailout in 2011, and as the crisis deepens again, many think it highly likely they will need another bailout very soon. If Portugal were to default, it would almost certainty mean their expulsion from the eurozone, and may lead other nations to follow their example.

A man died on the tracks at the Times Square subway station Friday morning, causing delays.
Police say the man appears to have been electrocuted on the No. 2 line at the Times Square-42nd Street Station just before 7 a.m.The victim was pronounced dead at the scene.
Northbound No. 2 and 3 train service was running local 14the Street to 72nd Street due to the police investigation.The circumstances of the death are unknown at this time.

View 2013 NYC Deaths in a larger map
This is the second death this month in the subway.

via Subway delays after man dies in fall onto tracks in Times Square | 7online.com.

MSNBC host Melissa Harris-Perry has sparked controversy for challenging the belief that children are fundamentally the responsibility of the parent, shifting responsibility for the nations children to society.