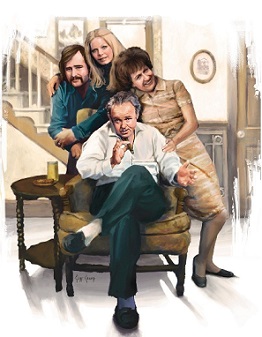 “The program you are about to see is All in the Family. It seeks to throw a humorous spotlight on our frailties, prejudices, and concerns. By making them a source of laughter, we hope to show — in a mature fashion — just how absurd they are.” CBS Intro at the first showing in January 1971.All in the Family was the CBS top-rated program for years, winning 22 Emmys. It depicted what it’s creators hoped would be a devastating blow to the foundation of the American Family. The archetype for an American working class father was Archie Bunker, a bigoted, opinionated, uneducated World War II veteran -a half wit Inspired by a British sitcom Till Death Do Us Part, Alf Garnet was the Archie Bunker in the BBC version. Unlike Archie, Alf was not a very likable character, Archie Bunker however , was a lovable buffoon.Episode after episode, brought to the forefront a societal issue, Women’s “Lib” , gun control, gay rights, religion, racial integration, — with Archie , and his street level Mugs Mahoney eloquence, pitching the conservative viewpoint.Mike aka ‘meathead’, played by Rob Reiner, son of the shows creator Carl Reiner, a limousine liberal and stalwart of Left wing media manipulation pitching the liberal stance.ArchetypesAll in the Family was regarded as the most influential sitcom in television history. It ridiculed a generation of American Fathers, depicting them as racist, ignorant, sexist opinionated jerks. Archie’s friends are also portrayed in the same fashion, Barney for instance. But of course, Michael’s buddies are portrayed as knowledgeable, articulate and ‘enlightened. In the public mind, traditional conservative ideals became associated with ignorance and intolerance, whereas liberal opinions are associated with education, knowledge, enlightenment and tolerance. “…Archie Bunker was the most devastating ideological scam in the cultural history of television. Archie Bunker was the conservative. He was ignorant, semi-illiterate, racist, mean, cowardly, and a sycophantic bully. Viewers were invited to assume that these were properties of everyone who resisted any civil-rights initiative, who thought favorable notice might be made of anything done by President Nixon, or thought the Vietnam War defensible.” -William F. Buckley Jr.”Archetype,” as used in advertising and propaganda, is based on Carl Jung’s theory that human beings have an innate tendency to visualize via symbolism -concepts, and that the subconscious plays a vital role in forming our opinions. Archetypal images represent the basis of fundamental thought, human needs and desires. They have been used extensively in advertising and by propagandists to subtly persuade the masses to purchase their goods or services, or to manipulate public opinion and thought.