Getting 50 MPG out of a gallon of gas has gotten a lot more expensive over the past 20-something years. 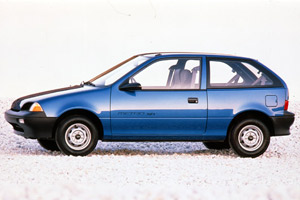 See here, if you don’t believe me.

Today, the only new car that can match that mileage is a Toyota Prius hybrid – the least expensive version of which – the 2013 Prius C – has a sticker price of $18,950 in current Fed Funny Money. So, you’ll pay nearly twice as much to go about as far on a gallon of gas. (Actually, more than that, because it takes about three times the quantity of Fed Funny Money to buy a gallon today vs. back in 1990.)

If Uncle really gave a damn about us – as opposed to increasing his power over us –  don’t you think he’d encourage more cars like the Metro? Wouldn’t they “reduce our dependence on foreign oil”? Wouldn’t they contribute less to “global warming” by dint of converting less gasoline into carbon dioxide?

The Federal Reserve has announced it will begin another round of quantitative easing. The central bank has said it will buy up $40bn of mortgage backed bonds a month to try and stimulate the housing market.

Economists believe QE3 could see the Fed buying up $1.5 trillion in total. This latest bid to stimulate the economy is being called “Operation Twist”. The Fed have also pledged to keep interest rates at the current record low until 2015.

However, critics argue that QE 1 and 2 were largely ineffective; that you cannot keep printing money indefinitely; and that it may do more harm than good. Some Republicans are saying the move is political, and Romney has said that he would replace Ben Bernanke as chairman of the Federal Reserve if elected.

Some new and more radical solutions are beginning to be discussed about how to save the Euro from collapse. One of these solutions is for the IMF to provide funding for Italy and Spain if they need help. They are thought to be planning an $800bn bailout package, but the deal would mean the European bailout fund would have to underwrite the first 30% of any defaulted debt, therefore they still need the €1 trillion in the bank (which still poses the same problem of where to get that from), and they also suggest the bail out fund begin to issue bonds. This would mean many other countries other than Eurozone ones, helping bailout the Eurozone. America contributes 17% to the IMF, consequently, America would send Italy $136 billion under this deal!

Another solution is that the US Fed, buys up the European countries bonds. These are currently all but unsellable. By doing so, the borrowing costs of Spain and Italy would fall overnight, and the US Fed would in effect take the place of lender of last resort, a role the European Central Bank has thus far refused to fill. However, there are two problems with this plan: firstly it could hurt the dollar, and secondly inflation, as it would have the same effect as printing money. The fear of inflation is one of the issues which has hampered action being taken. Germany has an unhappy history with inflation, and the German people and government are wary of anything that may trigger it again. But, many respected economists believe the main threat facing Europe is hyper-deflation.

However, neither of these solutions deal with the underling cause of the crisis. That of a single currency operating with a 30% misalignment between north and south; only the exit of either the wealthy northern states, or the exit of the poorer PIIGS states can solve that. Perhaps some US imposed inflation will make this prospect seem more palatable to the German’s?

With the European stale-mate still very much evident, it looks more likely that the rest of the world will have to take action in order to avoid a global depression, worse than that of the 1930’s financial crash.