Opponents  of President Trump will gather next week to perform an occult ritual to bind the President and his administration. It is believed thousands will participate in the Halloween ritual.

The ritual has been regularly performed since the President’s inauguration. And those who do it believe the impeachment proceedings are evidence of their success. “I’m willing to go on record and say it’s working,” said Michael Hughes, who came up with the ritual.

Thousand of people all over the country and across the globe perform the ritual during every waning crescent moon. But with Halloween more people are expected to participate.

Karen Tibbits-Williams, a New Zealand-based witch said the purpose for the ritual was “to stop the harm” Trump’s administration is doing.

“I’ve seen for myself, many times over, the power and effectiveness of magick. My confidence in the power and efficacy of our Binding — and the effect which it is having — is absolute. I don’t ‘believe’ that it works … I know it does,” she said.

For the first time in our 39 year history, the Mayor’s Office of Emergency Management and the NYPD have CANCELLED the Parade.

We hope that everyone who would have come to the Parade is safe and that those who can volunteer to help out at one of the  Emergency Outreach Centers near you. This year’s Parade would have been on Wednesday, October 31, 2012 7 p.m.

“This pageant evokes the muses.” 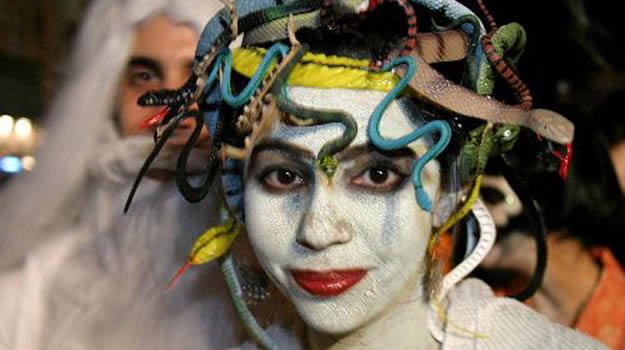 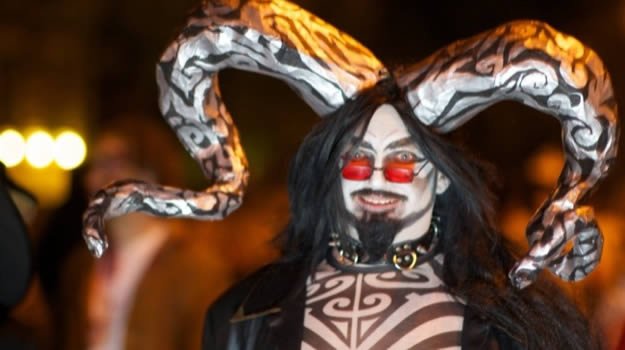 Oakland.  While some will be coming off a sugar high and reveling in the halloween spirit of the season others will be hosting another… celebration?

An annual ritual of honoring the dead will be performed in North Oakland on Nov 1.

“It’s about remembering our forefathers, our ancestors, and for me there’s actually something spiritual about that,” stated local event founder K. Ruby Blume.  “It’s also really connected to the seasons … there’s this sense (that) nature is dying. Traditionally, there’s this sensibility that the veil is thin and people can cross over.”

After a march to Dover Park, a ceremony to call out the dead will be performed.  An alter will be built for participants to offer flowers, candles and photos of deceased loved ones.

Blume is hoping for a more intimate milieu in the Oakland location, therefore recording equipment is discouraged.  Event start time will be around 5:30 at either the Driver or McGregor parks, the march will head to Dover Park and the ritual and altar building should be around sunset.

Emergency management teams and utilities along the East Coast are bracing for what could be a $1 billion punch as Hurricane Sandys 100 mph winds barrel toward the heavily populated region between the Carolina coast and Cape Cod.The Category 2 storm, which has killed two in the Caribbean as it swept through Cuba and blew toward the Bahamas, may combine with other, rain-heavy weather systems to create what meteorologists are calling a “perfect storm” that could wreak havoc from North Carolina to Massachusetts early next week. Sandy will likely maintain its hurricane status as it passes over the Bahamas later Thursday and may bring tropical storm conditions along Florida’s southeastern coast by early Friday.“We are taking the forecast seriously.”- Laura Southard, Virginia Department of Emergency ManagementJeff Masters, a meteorologist for Weather Underground, called the hurricane a “perfect storm,” and predicted early next week that it could cause $1 billion or more in damage.In Virginia, where the storm may make landfall as early as this weekend, officials from the state’s Department of Emergency Management are advising residents to make preparations in advance and to closely watch local forecasts.“We are taking the forecast seriously,” VDEM spokeswoman Laura Southard told FoxNews.com. “We are in close contact with the National Weather Service and the National Hurricane Center, so we’re getting the best information we can.”Residents in the storm’s expected path, Southard said, should have a three days’ supply of water on hand, or one gallon per person per day, enough for drinking, cooking and some bathing.“They should have at least a 3-day supply and food that doesn’t need electricity to prepare it,” she said.To combat extended power outages, Southard suggested residents purchase battery-powered radios and extra batteries.“Pay attention,” she said. “Expect that there’s going to be some effect and go ahead and make some preparations.”Southard said state officials likely will add more employees at its emergency center in Richmond beginning on Saturday.“It looks like things are coming together,” she said. “And it never, ever hurts to be prepared.”In New York, Consolidated Edison is warning its 9 million customers in Westchester County and New York City to stay away from any downed power lines if and when the storm strikes the Empire State.“Treat any downed line as if it’s alive,” Con Ed spokesman Christ Olert told FoxNews.com. “Stay away.”Olert advised residents to charge portable devices in advance and to have extra batteries on hand in the event of outages.“We’re watching it and we’ll be prepared,” Con Ed spokesman Chris Olert told FoxNews.com. “We’ll have extra crews available and, if need be, we’ll go to 12-hour shifts.”The U.S. National Hurricane Center said Sandy emerged off Cubas coast early Thursday and was moving north at 18 mph with maximum sustained winds of 105 mph. It was expected to remain a hurricane as it moves through the Bahamas. A tropical storm warning has been extended northward as far as Flagler Beach and a tropical storm watch was issued for the northeastern Florida coast.”Itll be a rough couple days from Hatteras up to Cape Cod,” said forecaster Jim Cisco of the National Oceanic and Atmospheric Administration prediction center in College Park, Maryland. “We dont have many modern precedents for what the models are suggesting.”White House officials, meanwhile, said President Obama has been briefed on Hurricane Sandy and urged people within the storm’s projected path to monitor local weather reports. Federal emergency management officials have been working with local authorities to prepare, spokesman Jay Carney said Thursday.