New York Mayor De Blasio has mandated that all New Yorkers must be vaccinated if they want to go to work.  Public Sector workers have already had to be vaccinated, but now the mandate will include the private sector.

Residents have until December 27th to comply. The mayor has also urged other cities to follow his lead.

“This would be my advice to mayors, governors, CEOs all over the country – use these vaccine mandates. The more universal they are, the more likely employees will say, OK it’s time I’m going to do this, because you can’t jump from one industry to another or one company to another. It’s something that needs to be universal to protect all of us.”

The Supreme Court has voted to lift the moratorium on evictions in New York, which was put in place during the pandemic.

A group of landlords went to the Supreme Court to have the ban lifted. The court voted 6-3 in favour of lifting the ban.

New York has seen a spike in Covid 19  hospitalizations in the last 24 hours. The 75% increase in new admissions is still below the limit to halt the reopening of the city.

De Balsio, when asked if he thought the spike was caused by the protests around  George Floyd’s death said, “I would be surprised if that’s what’s causing it,” de Blasio said Friday of the sustained demonstrations that have broken out in the Big Apple and cities throughout the world. “I think we’re much more likely in the next week [or] 10 days to see a manifestation, if there is one.”

However, Gov. Andrew Cuomo has been unhappy with the mass gatherings of people protesting, saying, “If you were at one of those protests, I would, out of an abundance of caution, assume that you are infected, …..One person, one person can infect hundreds if you were at a protest.”

New York lawmakers have voted to allow illegal immigrants to obtain drivers licenses. They have become the 13th state to do so. Lawmakers have even said free child care will be available for parents whilst going through the process to obtain one. All an individual requires is an expired passport, identification from a consulate or a license from their home nation.

A Washington DC think tank have also attacked the decision as a threat to national security, by allowing people to obtain official identification who may want to use it for nefarious intentions.  “The federal government should not simply surrender to the unreasonable and potentially unconstitutional limitations imposed on federal immigration and local law enforcement agencies by this law,” the Center for Immigration Studies (CIS) writes in its extensive report.

New York City have removed 110 trash cans and now the city’s rat problem is worse than ever. Since 2014 the city has seen a 38% increase in rat complaints in the city, despite Mayor de Blasio spending $32 million to try and fix the problem.

The rodents are attracted to overflowing trash cans, as it is an easy food source. Campaigners say the problem will not improve until a better system for the city’s garbage is put in place.

The numbers are plain: New York’s population is falling, for the first time in more than 10 years. New York was once the have-to-be-place for anyone who wanted to make it big in media, fashion, tech, or banking. But now with the ability to remotely work this is no longer the case.

And with the high taxes, high cost of living, crumbling infrastructure, poor schools, and dysfunctional transit system New Yorkers who can are choosing to leave.

The driver of the SUV hijacked by the Boston bombers has spoken of how he escaped and helped police capture the bombers.

It has emerged that the brothers were planning to drive to New York and detonate their remaining explosive devices in Times Square. However, their plan began to fall apart when the brothers realised the SUV did not have enough gas to make it to New York, and the driver, who is being called “Danny”, explained how he was able to flee from the car whilst the older brother, Tamerlan Tsarnaev, was distracted by the satellite navigation device.

After Danny escaped he contacted police, and told them how he had left his iPhone in the car, to enable police to track the vehicle.

Police were able to corner the suspects within hours, in the Boston suburb of Watertown, where the elder brother was shot dead in the shoot out that ensued.

In further developments it has emerged that the Tsarnaev brothers mother, Zubeidat Tsarnaeva, 46, was placed on the US watch list of potential terrorists in 2011, after security warnings from the Russian authorities. Since the Boston bombings Zubeidat Tsarnaeva has made emotional pleas to the media declaring her sons were innocent, and had been framed.

Thursday 4th and Friday 5th of April saw the Lincoln Centre in New York host the annual “Women in the World” Conference. The Women in the World Foundation was born out of Newsweek and The Daily Beast’s annual Women’s Summit, and seeks to advance the rights of women and girls worldwide.

The 2013 conference was attended by over 2,500 women from across the world, and saw many big names converge on New York City. Keynote speakers included Hillary Clinton, Angelina Jolie, and Oprah Winfrey.

Under discussion were issues like safe access to maternity services for women in third world countries, the plight of orphans, education for girls in countries where girls rarely have the opportunity, human trafficking, and the horrors women face in war zones like present day Syria. 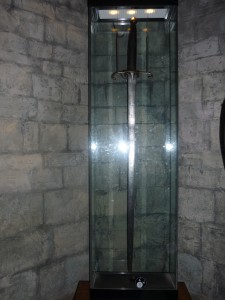 International Church of the Gates, New York, was officially started 31st March 2005, and is about to celebrate it’s eighth anniversary.

The official opening coincided with the sword of William Wallace being paraded through the streets of New York; the first time the sword had left Scotland in 700 years.

The church was planted in Manhattan New York, in order to build a spiritual wall of protection around the city, so the city would be protected from further destruction like that seen on 9/11.

For many years DPM (founder of the church) was inspired by Mel Gibson’s films and has been revealing the Biblical stories or the spirit the films were of, illustrating spiritual truths.

For example: Braveheart – William Wallace (played by Mel Gibson), couldn’t understand why those leaders whom we admire that seek to rule over us, (represented by the “religious system” currently in place) compromised with the enemy instead of destroying him.

Since these leaders wouldn’t fight, God Himself rose up from the ranks of the common man in Scotland, one of the spirit of David if you will, a man to raise an army to overthrow the ruling demonic principalities (then represented by England).  He gathered some comrades together and did battle, and Scotland (God’s people) were free of the ruling principality forever.

The same sword used by the actual historical William Wallace, has never left Scotland and has remained as a historical treasure for over 700 years to this day!

Scotland prophesied, the enemy would never have William Wallace’s sword!

This sword has ALWAYS meant FREEDOM! (as Mel Gibson so eloquently put it!)

Before the New Years Trip to Manhattan NY, DPM had no desire whatsoever to go.

But told God he would be obedient and asked if God would please warm up the weather for him.

Results? 2005 News Years Eve in Times Square was one of the warmest in centuries.

The day before leaving for NY, Prophets told DPM that men would begin to hear what DPM had been speaking for years, as the rule of the religious vail was broken.

Then, at the end of the New Years Eve trip God gave DPM a dream, a ruling principality, confronting DPM says: “You stole my WATCH, and I want it back!

DPM understood this to mean one level of controlling spirit had lost it’s foot hold over the city/nation, and that the fight was on to completely eradicate that which resisted the rule of the Spirit of God over our media cities, which control our perception of God and the perception over our nation.

The spirit DPM took the “watch” from, represents a ‘religious spirit’, which blinds many of today’s Christians as to the gifting and power of the Holy Spirit that God has given us, so we could truly rule and reign over ALL the works of the enemy!

What does all this have to do with the new church plant in New York?

Friday April 1 2005 the sword of William Wallace, which represents freedom from tyranny, left Scotland for the first time in 700 years and arrived in New York!

Saturday April 2 2005, Pope John Paul II died. In a sense, this represents the old religious system or procedure that is passing away, making way for a fresh, new move of God that indeed is already here.

And on the eve of the anniversary, only one month ago, did the following Pope quit his office…

North Korea’s official government website released a propaganda video showing a young man sleeping and having a dream. In his dream the man goes in a space shuttle and orbits the earth. The dream shows a missile being launched, similar to one the rogue state tested in December last year.

The dream then shows a unified Korea, and an image of the America flag. This is followed by images of a city like New York under attack.

“Somewhere in the United States, black clouds of smoke are billowing,” runs the caption across the screen.

“It seems that the nest of wickedness is ablaze with the fire started by itself,” it added.

The music in the background is “We Are the World”. The video ends with the young man waking up and with him concluding this dream will “surely come true”.

It is expected that North Korea will soon perform more nuclear tests, despite further UN sanctions imposed in December.

The gunman who shot dead two firefighters in upstate New York, left a note saying “Killing is what I do best.”

In the note William Spengler, 62, also said he wanted to burn down his neighbourhood, and kill as many people as possible.

The charred remains of a woman were found in the burned out house, she is believed to be his sister.

Spengler, convicted of the manslaughter of his grandmother in 1981, was found dead of a self-inflicted gun shot wound hours after the killing of the fire fighters.

Two firefighters have been shot dead as they tackled a house fire in upstate New York, one other was injured.

The firefighters were called out to a blaze that engulfed three houses, in Webster, when a gun man opened fire with an assault rifle.

Early reports suggest that the gun man is still on the loose.

This latest shooting comes after 26 people, including 20 children were shot in Newtown, Connecticut. The debate on gun law reform is now gripping the nation, with many calling for stricter gun laws, but with the NRA saying “The only thing that stops a bad guy with a gun is a good guy with a gun”.