The Egyptian capital Cairo erupted in violence today, as both pro-and anti-Morsi protesters held huge rallies in the city.

The ousting of the elected President Mohammed Morsi has left the county divided and today’s violence has raised the speculation the country is heading towards civil war.

The military is being accused of killing over 100 pro-Morsi protesters. The clashes have also left around 1,500 people injured.

There has also been violence in Egypt’s second city Alexandria, leaving around 10 dead.

Morsi is currently under arrest, accused of plotting jail breaks during the overthrowing of President Mubarak, as well as conspiring with Palestinian militant group Hamas, which has strong links to the Muslim Brotherhood. It is believed Morsi is soon to be moved to the same prison Mubarak is currently being held.

Anti-capitalist groups converged on London today to protest ahead of the G8 summit in Northern Ireland next week.

Riot police were deployed as protests turned violent and protestors damaged buildings in central London. The StopG8 group had called for disruption on the streets on London for the week running up to the G8 meeting, asking that anti-capitalist groups create a “Carnival Against Capitalism”. Police made 57 arrests during the demonstrations which centred on the Oxford Street and Regent Street areas of the city.

The G8 meeting of the world’s wealthiest leaders begins next week at the Lough Erne resort in Co Fermanagh, Northern Ireland.

Ten days since protestors took to the street of Istanbul, the President has ordered that the protests stop now. Police have been told to continue operations on the streets of the city, night and day, until the protests end.

The crack down centred on Taksim Square, and saw police fire tear gas at the crowd and use water cannons to break up the protests. The protestors retaliated by using fireworks and petrol bombs.

Lawmakers in Greece were able to push through a bill worth 13.5bn-euro ($17.3bn). The bill includes tax hikes and pension cuts. These are needed before Greece can secure the next instalment of their bailout money from the EU/IMF.

The latest austerity bill was passed by only three votes, and has seen violent protests in Athens as a result.

The saga of austerity, recession and bailouts continues in Greece. Today the nation has been brought to a standstill as the unions call a 48 hour General Strike. The strike is ahead of a crucial vote on more austerity measures, the package would see a further €18bn of cuts and reforms. The measures are required if Greece is to receive the next instalment of bailout money. Greek prime minister Antonis Samaras is under massive pressure to carry the vote through parliament. He has only a slim majority, and politicians are deeply divided over the issue.

The EU is concerned that Antonis Samaras ruling coalition could fall apart, as a collapse in government would most likely see the far left and far right make major gains – both sides are opposed to the EU/IMF imposed austerity conditions.

The far right, Golden Dawn party, has capitalised on the problems in Greece, making huge gains across the country. In some areas where crime is out of control the Golden Dawn lead groups patrol the streets and attack migrants, who they see as the problem. The overstretched police have failed to stop the attacks.

Once prosperous areas of Athens are now “no go” areas as gangs take control and crime increases. Residents are now looking to the Golden Dawn to protect them. 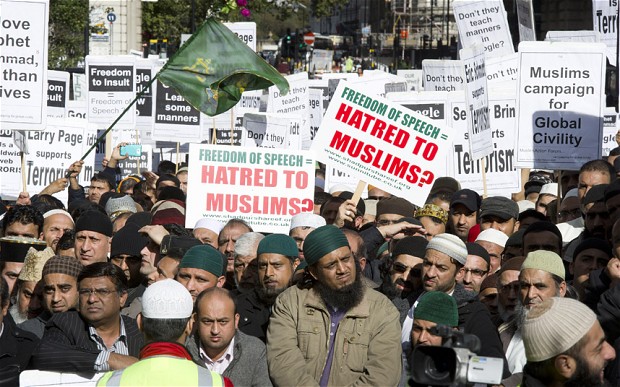 Muslim’s from across the United Kingdom have descended on London to protest outside the British Head Quarters of Google.

The protesters are demanding Google remove the anti-Muslim movie, “The Innocence of Muslims”, off YouTube. The organiser of the rally, Masound Alam has warned of further protests outside Google offices world wide until the movie is banned, adding “This is not freedom of expression, there is a limit for that. This insult of the Prophet will not be allowed.”

Protests held up banners saying “Freedom of Speech = Hatred to Muslims?”, and are arguing that we are in an “Age of Mockery”.

One of the speakers, Sheikh Faiz Al-Aqtab Siddiqui, told The Daily Telegraph: “Terrorism is not just people who kill human bodies, but who kill human feelings as well. The makers of this film have terrorised 1.6 billion people.

“Organisations like Google are key players and have to take responsibility for civility. You can’t just say it doesn’t matter that it’s freedom of speech. It’s anarchy.”

YouTube have responded saying the video does not violate any of their terms of usage, and will therefore stay on their site. What is offensive to one person, or in one country is not in another.

San Francisco.  Oliver Barcenas, a known Norteno gang member who is currently on parole for a recent gang related shooting, was wounded by a policeman after he raised a TEC-9 gun at the same officer.

According to investigators, Barcenas was enroute for a revenge gang killing when he was stopped and wounded by San Francisco Police.

According to Police Chief Greg Suhr “These officers on Thursday night were exactly where they were supposed to be, doing exactly what they were asked to do,”.

However, this incident has sparked two nights of protests in the Mission district which included vandalism.

The French satirical magazine Charlie Hebdo has printed cartoons of the prophet Mohammed naked in it’s latest addition. The magazine has a history of using satire to poke fun at organized religion. Last year the magazine was attacked by a fire bomb after it ran cartoons depicting Mohammed. This latest publication has been condemned by the French government, and has led to riot police being deployed to protect the magazines Paris headquarters. France has also shut it’s embassies, and schools in Islamic countries, in fear of a backlash

Charlie Hebdo has responded to the criticism by saying they were not attacking Islam, by commenting on the protests against America as a result of the anti-Islam, “Innocence of Muslims”.

Protests against America have continued to spread across the Arab world, over the movie by an American film maker depicting the muslim prophet Muhammad. US Marines are now deployed in Yemen as the US embassy has come under attack.

The protesters have also started to target British and other European embassies in Islamic nations. The German embassy in Sudan was stormed and partially set alight.

Protesters in Tunisa have reportedly jumped the embassy wall. It is believed three people have been killed in the protests in Tunisia, with 28 injured.

There have been protests in around 20 countries around the world, mostly peaceful. The worst of the violence has been in Middle Eastern nations.