Former House Speaker Newt Gingrich says that Donald Trump’s five big wins Tuesday night mean the only thing left for establishment Republicans to do is to get over it and accept that Trump will be the GOP nominee.

You see the momentum building here, Gingrich said on Fox News Tuesday night. I think it’d be very, very hard, virtually impossible, to stop him from winning the nomination at this point.

This is an enormous achievement building on New York, and means that he’s almost certainly going to have an absolute majority of the delegates before you get to the convention in Cleveland, Gingrich added.

Gingrich also laughed off the idea of a contested convention, after Fox host Bill Hemmer showed that Trump now has a likely path to getting the 1,237 delegates needed to clinch the nomination.

Source: Gingrich to GOP establishment: ‘Get over it’ | Washington Examiner

We also predicted that only 634 delegates would remain and therefore Cruz would need more delegates than would be available.

It is clear that Cruz was eliminated tonight.

It is not clear yet on how devastating the final numbers will be for Ted Cruz.

Ted Cruz finished third in Connecticut, Maryland, Delaware and Rhode Island.
There are fewer delegates remaining than we originally projected because the delegates in Wyoming, Colorado and North Dakota were allocated in shady voter-less elections after April 2nd.

After tonight’s primaries Cruz has — 560 delegates after winning one delegate Tuesday.Cruz needs 677 delegates to reach 1,237 delegates.

There are only 622 available.

In 2011, retired firefighter Mark Taylor says, God showed him a vision in which Donald Trump would become president of the United States.
April 28, 2011, the now-Republican presidential front-runner gave a speech in Las Vegas to a gathering organized by the Clark County Nevada Republican Party. At the time, he was mulling a possible 2012 presidential bid while hounding President Obama to release his birth certificate.
During the Las Vegas visit, Trump did an interview, which Taylor watched on television. During that interview, he said God told him he was listening to the president. Although Trump eventually did not run for office in 2012, the retired firefighter believes the businessman’s 2016 run is God-ordained, and shared his vision this week with Rick Wiles of TruNews:

The Spirit of God says, I have chosen this man, Donald Trump, for such a time as this. For as Benjamin Netanyahu is to Israel, so shall this man be to the United States of America! For I will use this man to bring honor, respect and restoration to America. America will be respected once again as the most powerful and prosperous nation on earth, (other than Israel). The dollar will be the strongest it has ever been in the history of the United States, and will once again be the currency by which all others are judged.

The Spirit of God says, the enemy will quake and shake and fear this man I have anointed. They will even quake and shake when he announces he is running for president, it will be like the shot heard across the world. The enemy will say what shall we do now? This man knows all our tricks and schemes. We have been robbing America for decades, what shall we do to stop this? The Spirit says HA! No one shall stop this that l have started! For the enemy has stolen from America for decades and it stops now! For I will use this man to reap the harvest that the United States has sown for and plunder from the enemy what he has stolen and return it 7 fold back to the United States. The enemy will say Israel, Israel, what about Israel? For Israel will be protected by America once again. The spirit says yes! America will once again stand hand and hand with Israel, and the two shall be as one. For the ties between Israel and America will be stronger than ever, and Israel will flourish like never before.

The Spirit of God says, I will protect America and Israel, for this next president will be a man of his word, when he speaks the world will listen and know that there is something greater in him than all the others before him. This man’s word is his bond, and the world and America will know this and the enemy will fear this, for this man will be fearless. The Spirit says, when the financial harvest begins so shall it parallel in the spiritual for America.

The Spirit of God says, in this next election they will spend billions to keep this president in; it will be like flushing their money down the toilet. Let them waste their money, for it comes from and it is being used by evil forces at work, but they will not succeed, for this next election will be a clean sweep for the man I have chosen. They will say things about this man (the enemy), but it will not affect him, and they shall say it rolls off of him like the duck, for as the feathers of a duck protect it, so shall my feathers protect this next president. Even mainstream news media will be captivated by this man and the abilities that I have gifted him with, and they will even begin to agree with him says the Spirit of God.

Is Taylor right? Wiles explored that question, and all of the retired firefighter’s prophecy in detail during the 68-minute program. You can listen to the entire interview by clicking here. 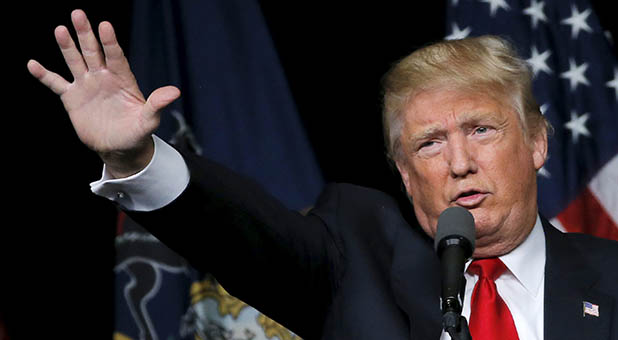 Source: Donald Trump Is a Central Figure in This Prophecy — Charisma News

…Webb’s articles revealed that the US government continued to support Contra elements even with the knowledge that the latter were engaged in trafficking cocaine into major US cities and using the proceeds to finance their war against the Sandinista (FSLN) government of Nicaragua. Webb’s investigation showed that representatives of the US-backed right-wing militias worked with gangs in Los Angeles to sell tons of cocaine, leading to speculation from other commentators that the CIA DIRECTED THE FLOW OF DRUGS TO TARGET BLACK NEIGHBORHOODS…

We all know the CIA was complicit in the sales of drugs into black communities in LA, NY and across the nation during the Arms for Drugs Contra scandal white man Gary Webb exposed and was assassinated for…

and now,
Prince talks about Chemtrails causing black people in neighborhoods to fighting and at the 4 Min mark you will hear Dick Gregory and how black people are concerned about the white race putting chemicals “in my water”.

China conducted another flight test of its newest and longest-range intercontinental ballistic missile last week amid growing tensions with the United States over the South China Sea.

Pentagon officials told the Free Beacon the flight test of the new road-mobile DF-41 missile took place Tuesday with two multiple, independently targetable reentry vehicles, or MIRVs, that were monitored in flight by U.S. military satellites and other regional sensors.

Officials did not say where the test took place. Past DF-41 launches were carried out from the Wuzhai Missile and Space Test Center in central China.

The latest flight test followed an earlier, rail-based canister ejection test of a DF-41 on Dec. 5.

The flight test came around the same time that a high-ranking Chinese general made an unusual visit to a disputed South China Sea island. Also, the missile test occurred three days before Defense Secretary Ash Carter visited the aircraft carrier USS Stennis as it sailed in the South China Sea.

Pentagon officials said the visit to Fiery Cross Reef in the Spratly Islands by Gen. Fan Changlong was timed to the Carter visit to the region. Fan is vice chairman of the Central Military Commission, the most powerful military organ under the ruling Communist Party of China.

The Pentagon has said China is covertly building military bases on disputed islands in the sea. Beijing has accused Washington of militarizing the sea by deploying warships and bolstering regional alliances.

Disclosure of the DF-41 test follows a newsletter report last month that stated China is nearing deployment of the new ICBM.

Kanwa Asian Defense reported last month that the new ICBM is in the final testing phase, and its expected deployment area will be near Xinyang in Henan province, in central China.

From that location, the missile would be capable of striking the United States in around 30 minutes, either through a polar trajectory or over the Pacific.

Prince was treated for a drug overdose 6 days before his death … multiple sources tell TMZ.
We broke the story … Prince’s private jet made an emergency landing in Moline, Illinois last Friday, hours after he performed in Atlanta. At the time his reps said he was battling the flu … something we questioned because his plane was only 48 minutes from home before the unscheduled landing.
Multiple sources in Moline tell us, Prince was rushed to a hospital and doctors gave him a “save shot” … typically administered to counteract the effects of an opiate.
Our sources further say doctors advised Prince to stay in the hospital for 24 hours. His people demanded a private room, and when they were told that wasn’t possible … Prince and co. decided to bail. The singer was released 3 hours after arriving and flew home.
We’re told when Prince left he “was not doing well.”
We know authorities in Minnesota are trying to get the hospital records from Moline to help determine cause of death.
We have made more than a dozen attempts to reach Prince’s reps for comment, but they went radio silent.

Saudi Arabia is threatening to sell $750 billion in American assets if Congress passes a bill that would allow 9/11 victims to hold the kingdom legally responsible for the terrorist attacks, a report said.

A Saudi sale could, in theory, destabilize the dollar and create global market turmoil, although some economists believe it is an empty threat.

The bill, co-sponsored by Sen. Charles Schumer, would remove immunity given to a foreign nations if the country’s government is found responsible for a terrorist attack on US soil — which could make the Saudi government vulnerable to a federal lawsuit by the families of 9/11 victims.

The threat comes before President Obama’s trip to the oil-rich nation for meetings with King Salman bin Abdulaziz al Saud on Wednesday.

In its report on the still-censored “28 pages” implicating the Saudi government in 9/11, “60 Minutes” last weekend said the Saudi role in the attacks has been “soft-pedaled” to protect America’s delicate alliance with the oil-rich kingdom.

That’s quite an understatement.

Actually, the kingdom’s involvement was deliberately covered up at the highest levels of our government. And the coverup goes beyond locking up 28 pages of the Saudi report in a vault in the US Capitol basement. Investigations were throttled. Co-conspirators were let off the hook.

Case agents I’ve interviewed at the Joint Terrorism Task Forces in Washington and San Diego, the forward operating base for some of the Saudi hijackers, as well as detectives at the Fairfax County (Va.) Police Department who also investigated several 9/11 leads, say virtually every road led back to the Saudi Embassy in Washington, as well as the Saudi Consulate in Los Angeles.

Yet time and time again, they were called off from pursuing leads. A common excuse was “diplomatic immunity.”

Those sources say the pages missing from the 9/11 congressional inquiry report — which comprise the entire final chapter dealing with “foreign support for the September 11 hijackers” — details “incontrovertible evidence” gathered from both CIA and FBI case files of official Saudi assistance for at least two of the Saudi hijackers who settled in San Diego.

The blue-chip index has gained nearly 15% since mid-February, as early-year fears about the U.S. economy faded, oil prices rebounded and the Federal Reserve signaled a cautious approach to raising rates. With Monday’s advance, the Dow is up 3.3% for the year.

Prophet must be in the zone…