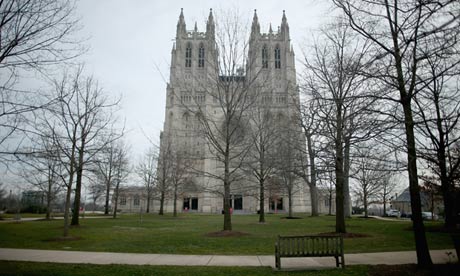 The National Cathedral has a long and illustrious history. Hosting inaugural services and funerals for Presidents. It was also the place Martin Luther King gave his final sermon.

The Cathedral is part of the Episcopalian church. The bishop of Washington DC, the Rt Rev Mariann Edgar Budde, decided in December to allow churches within the diocese to perform same-sex marriages if they wished.

Speaking to the Associated Press, Hall said, “I read the Bible as seriously as fundamentalists do… and my reading of the Bible leads me to want to do this because I think it’s being faithful to the kind of community that Jesus would have us be.”

In theory ceremonies could take place immediately, however it is likely the first marriages will take place within the next 6-12 months, due to the schedule of the Cathedral and the church’s requirement that couples take part in their pre-marriage counselling course.

One thought on “WASHINGTON NATIONAL CATHEDRAL TO PERFORM SAME-SEX MARRIAGES”