“The Bible say that ‘we fight not against flesh and blood, but against principalities, against rulers in high places.’ Satan is bigger than Lindsey Graham,” Burns said, drawing audible agreement from the audience. Graham represents South Carolina.

As Covid cases have begun to rise in the UK the government has taken the steps to impose regional lockdowns. However, this has caused anger for many just returning to business after weeks of lockdown and uncertainty.

Two weeks ago when the Prime Minister was asked about the restrictions in the north of England he was unable to give the correct answer. Many have said this points to the fact the restrictions are too complicated.

In the devolved regions of the UK the restrictions are different again. Scotland has just seen the central belt region have the harshest restrictions in the UK imposed. With hospitality shut down. Business owners have warned many of them will not be able to reopen. There is also widespread anger that regions have been shut down where little or no Covid has been reported.

Politicians in the UK have warned the British public to expect more of the same, and probably harsher restrictions as the winter months and flu season begins. However, as guidelines become more complicated, and businesses and jobs are hit hard will the public comply?

As Black Lives Matter appears to be a grass roots, street based group, it has highly influential supporters with deep pockets. In 2016 The Washington Times reported on the millions of dollars in funding flooding into the organization:

Black Lives Matter has seen more than $100 million from liberal foundations and donations.

The Ford Foundation and Borealis Philanthropy recently announced the formation of the Black-Led Movement Fund [BLMF].  The $100 million fund is in addition to $33 million funding from George Soros.

“The BLMF provides grants, movement building resources, and technical assistance to organizations working advance the leadership and vision of young, Black, queer, feminists and immigrant leaders who are shaping and leading a national conversation about criminalization, policing and race in America,” said the Borealis announcement.

However, the foundation has also aligned itself with the staunch far-left group Movement for Black Lives. The group has called Israel an “apartheid state” guilty of “genocide.”

There is clearly documented evidence that China sought to cover up the Coronavirus outbreak in it’s early days. Failing to contain the outbreak and even arresting the whistleblowers who sought to alert the world.

Some democrats where appalled when the President referred to the virus as the “China Virus” or “Wuhan virus”. Naming the Coronavirus Covid-19 the WHO has taken the spotlight off China, something Beijing is keen to see.

Despite Beijing’s failure to act, many in the West say blaming China is racism. However, not only did China fail to act, they actively censored information, and then spread misinformation by trying to blame the U.S. military for the outbreak.

After this pandemic has been brought under control and economies rebuild. Other nations need to address how they will conduct business with Beijing.

After the death of Elijah Cummings at 68 Ibra Kendi Director of Antiracism Research at Policy Centre,  American University argued it highlighted the greatest white privilege- life itself.

Kendi argues that black men have a life expectancy four years less than white men; and black women three years less then white women. He says this is proof or racism at the heart of the nation.

He goes onto argue that white supremacy is also hurting whites:

“White people are “dying of whiteness,” to use Jonathan Metzl’s term. Whiteness is concurrently a privilege and a deprivation. Racist whites are supporting Republican policies that are harming white Americans at growing rates, from loosening gun laws to protect against people of color, which are leading to white male gun-related suicides; to rebuffing life-saving and fortune-saving Affordable Care Act provisions in Republican states, so that nonwhites can’t get access. “White America’s investment,” Metzl explained, “in maintaining an imagined place atop a racial hierarchy harms the aggregate well-being of U.S. whites as a demographic group, thereby making whiteness itself a negative health indicator.” If white supremacy is a mass shooter, then it is killing us all.” 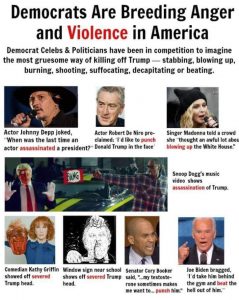 Ely Erlich in a recent online article posed the question: “Is Donald Trump a bad president or does the media exaggerate his faults?”

Erlich argues that the media is in fact pushing a false narrative. He used as his argument the coverage CNN and NYT gave to a press conference in the White House where the President hosted people from throughout the world sharing their stories about the religious persecution they had experience.

CNN-NYT pushed the narrative the President was unfeeling, and racist in his dealings with a young Yazidi Christian, who had been raped and watched members of her family massacred.  The news story said the President did not know her story. However the reason for the conference was to allow the woman and the others present to tell their stories to the global media, allowing them a voice, highlighting the injustices they had suffered. Attendees to the event praised the President for his work in this area, and the opportunity to share their stories. However, CNN and NYT turned the story into an attack on the President.