The Trump administration’s attempt to block New Yorkers from enrolling in trusted traveler programs is heading for court.

On Friday, Gov. Andrew Cuomo and the New York Civil Liberties Union announced their intention to file lawsuits against the Department of Homeland Security. DHS said this week that it will no longer allow New York state residents to sign up for popular programs intended to speed up international travel because of a state law that blocks immigration authorities from accessing motor vehicle records.

“You can’t do that. It’s an abuse of power. It is extortion,” Cuomo said at a press conference announcing the lawsuit.

New York’s “Green Light” law allows immigrants in the country illegally to apply for driver’s licenses. More than a dozen other states do the same. But New York’s law goes further: it prohibits the state’s DMV from sharing information with immigration authorities, unless a judge orders them to.

Democratic lawmakers on Tuesday brought legislation to both the House and the Senate which would hold gun manufacturers liable for crimes committed with their products.

The Dems hope to repeal legislation introduced in 2005 which offered protection for the gun industry.

However,  Lawrence Keane, senior vice president of government affairs for the NSSF said,“It’s like blaming Ford or General Motors for the negligent use of their cars,”

A significant portion of CNN’s staff that covers health is being laid off, which comes just days after CNN denied rumors that mass layoffs were coming to the far-left network.

“Specific details were not yet known, but a source told Fox News that ‘basically the whole division’ will lose their jobs,” Fox New’s Brian Flood reported. “CNN did not respond to multiple requests for comment.”

Flood noted that TVNewser, a media reporting website founded by CNN propagandist Brian Stelter, magically got confirmation on Friday — right before the weekend when the news cycle usually dies — that CNN was, in fact, laying off a lot of its employees.

Democratic presidential hopeful Pete Buttigieg on Sunday again took on Vice President Mike Pence — whose stances on LGBTQ issues have faced criticism from gay rights activists — saying that if Pence has “a problem with who I am, your problem is not with me — your quarrel, sir, is with my creator.”

Buttigieg, the mayor of South Bend, Indiana, made the comments while speaking at the LGBTQ Victory Fund National Champagne Brunch in Washington. He reflected on his personal struggles with his sexuality, his decision to come out in 2015 and the fact that his being gay is not the result of a personal decision.
“If me being gay was a choice, it was a choice that was made far, far above my pay grade,” Buttigieg said. “And that’s the thing I wish the Mike Pences of the world would understand. That if you got a problem with who I am, your problem is not with me — your quarrel, sir, is with my creator.”
Buttigieg’s comments came hours after he made critical comments about evangelical voters’ support of President Donald Trump during an appearance on “Meet The Press.”
“It’s something that really frustrates me because the hypocrisy is unbelievable,” Buttigieg said. “Here you have somebody who not only acts in a way that is not consistent with anything that I hear in scripture in church.” 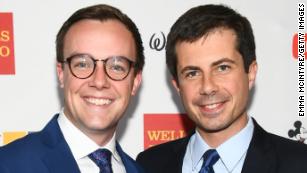 Pete Buttigieg’s not-so-secret weapon is his husband, Chasten
During his Victory Fund speech, Buttigieg said that, while he was growing up, he wished he wasn’t gay, but his marriage to his husband, Chasten Buttigieg, has made him a better person and has brought him closer to God. The two started dating four years ago and got married last June.
Pence has drawn the ire of members of the LGBTQ community in the past for his positions on various LGBTQ issues. A staunch conservative Christian, he signed the Religious Freedom Restoration Act while he was governor of Indiana. Critics of the law contend that individuals and businesses could use it to discriminate against the gay community on the basis of religion.
Pence also signaled support for federal funds to be allocated for gay “conversion therapy” on his 2000 US House campaign website, where it said “resources should be directed toward those institutions which provide assistance to those seeking to change their sexual behavior.”
Original Article