Rudy Giuliani questioned Dr. Anthony Fauci’s involvement in grants that the U.S. made to the lab in Wuhan, China, which has been linked to the Coronavirus outbreak.

There is growing evidence that points the finger to the laboratory as the source of the deadly outbreak. Giuliani has made his comments during an interview.  He also called on a full investigation to be made into the Wuhan investigation.

“Back in 2014, the Obama administration prohibited the U.S. from giving any money to any laboratory, including in the U.S., that was fooling around with these viruses. Prohibited! Despite that, Dr. Fauci gave $3.7 million to the Wuhan laboratory — and then even after the State Department issued reports about how unsafe that laboratory was, and how suspicious they were in the way they were developing a virus that could be transmitted to humans,” he claimed.

He added, “We never pulled that money. So, something here is going on, John. I don’t want to make any accusations. But there was more knowledge about what was going on in China with our scientific people than they disclosed to us when this first came out. Just think of it: If this laboratory turns out to be the place where the virus came from, we paid for it. We paid for the damn virus that’s killing us.

Dr Fauci has been the director for  the National Institute of Allergy and Infectious Diseases since 1984.

In court documents General Michael Flynn, President Trump’s former national security adviser, say they have previously undisclosed evidence that proves that Flynn was “deliberately set up and framed by corrupt agents at the top of the FBI.”

“This afternoon, the government produced to Mr. Flynn stunning Brady evidence that proves Mr. Flynn’s allegations of having been deliberately set up and framed by corrupt agents at the top of the FBI,” the supplemental filing submitted by Flynn’s attorney Sidney Powell reads. “It also defeats any argument that the interview of Mr. Flynn on January 24, 2017 was material to any ‘investigation.’ The government has deliberately suppressed this evidence from the inception of this prosecution—knowing there was no crime by Mr. Flynn.”

“In addition, Mr. Flynn’s counsel has found further evidence of misconduct by [head prosecutor Brandon Van Grack] specifically,” the filing continues. “Not only did he make baseless threats to indict Michael G. Flynn, he made a side deal not to prosecute Michael G. Flynn as a material term of the plea agreement, but he required that it be kept secret between himself and the Covington attorneys expressly to avoid the requirement of Giglio v. United States , 405 U.S. 150 (1972). Exs. 1, 2.”

MSNBC news anchor Nicolle Wallace has said that the “silver lining” of the Coronavirus pandemic is that it will hurt Donald Trump.

“There is something both tragic, and pathetic, and ironic about the fact that it took a, you know, color-blind, gender-blind, you know, state-line-blind virus to sort of have all of the president’s sins from his first three years catch up with him,” Wallace began during a panel discussion. “You can’t stand there and lie. You can’t contradict your scientists because they’re the ones that stand at 66 and 68 percent public trust, not you. He’s down at 38 percent. Pence is lower than him.”

She continued, “I mean, he needs those people whether he likes what they say or not and I wonder what you think about whether or not there’s some silver lining there, that some of the things that, that we’ve been talking about for three years may be finally catching up with him?”

The Federal Communications Commission (FCC) has asked Chinese government controlled telecoms companies why it should not revoke their authority to operate within the US.

FCC Chairman Ajit Pai wrote in a statement on Friday:

Foreign entities providing telecommunications services—or seeking to provide services—in the United States must not pose a risk to our national security. The Show Cause Orders reflect our deep concern—one shared by the U.S. Departments of Commerce, Defense, Homeland Security, Justice, and State and the U.S. Trade Representative—about these companies’ vulnerability to the exploitation, influence, and control of the Chinese Communist Party, given that they are subsidiaries of Chinese state-owned entities. We simply cannot take a risk and hope for the best when it comes to the security of our networks.

Researchers are working on a new U.V. light technology which is completely safe for humans, but kills Covid-19. The team at Columbia University has said it is a game changer.

The findings are in line with other studies which show the potential for U.V. light to kill Coronavirus in the air and on surfaces. However Democrats this week mocked the President for asking the question is UV light could give a potential cure for  Coronavirus.

Our system is a low-cost, safe solution to eradicating airborne viruses minutes after they’ve been breathed, coughed or sneezed into the air. Not only does it have the potential to prevent the global spread of the virus that causes COVID-19, but also future novel viruses, as well as more familiar viruses like influenza and measles.

[The new technology] uses lamps that emit continuous, low doses of a particular wavelength of ultraviolet light, known as far-UVC, which can kill viruses and bacteria without harming human skin, eyes, and other tissues, as is the problem with conventional UV light.

The research team’s experiments have shown far-UVC effective in eradicating two types of airborne seasonal coronaviruses (the ones that cause coughs and colds). The researchers are now testing the light against the SARS-CoV-2 [coronavirus] virus at Columbia in a biosafety laboratory, with encouraging results, Brenner said.

In the wake of President Trump’s decision to remove funding for the W.H.O. the U.S. are considering other ways to direct funds to health aid program.

America is the WHO’s top source of funding. However, China appears to hold more power over the UN agency than Washington.

We’re looking for different partners right now in terms of — working polio or any number of health issues — are there other entities, local community-based entities, faith-based organizations, are there other groups that can continue on this work. So part of the assessment that is taking place during this 60-to-90-day pause is to evaluate the availability of new partners to carry out this work.

A grassroots think tank and activist groups had argued that the aerial surveillance would violate their first and fourth constitutuional amendment rights. However the judge overruled this, opening the door for the first test flights.

The Police want to run a six month trial consistently flying drones over the city with cameras.  Weather permitting the drones will fly 40 hours per week, and cover 90% of the city. The police department say they will help tackle serious crime like murder, carjackings, and armed robbery.

The President has announced that he has instructed the Navy to “destroy” any Iranian Ships that are harassing U.S. in the Gulf region. The announcement comes amid escalating tensions in the region.

“I have instructed the United States Navy to shoot down and destroy any and all Iranian gunboats if they harass our ships at sea,” Trump tweeted.

A week earlier Iranian soldiers stormed a tanker in the Strait of Hormuz, however they quickly left after discovering the vessel was from China.

Iran’s Revolutionary Guard has announced the launch of the countries first satellite. It is believed the satellite is part of a wider military space program, to advance the country’s ballistic weapons capability.

The Chinese Company, Shenzhen-based DJI Enterprise, has donated drones to U.S. Police departments. The drones are to be used in the surveillance of people violating social distancing restrictions.

On the manufacturer’s website, DJI uses examples of police agencies, like Daytona Beach, Florida police, who plan on using the drone’s loud speaker to disperse crowds to avoid the spread of COVID-19.

“As far as patrolling the streets and shouting messages … that’s not what these are for,” Kent County Sheriff’s Department Lt. Joel Roon told the news station.

The drones are smaller than the current fleet and are equipped with a light and a speaker.

The decision to accept the drones was based more on opportunity than a specific mission.

A flaw in Apple iPhones and iPads has been discovered that could have  given hackers access to devices for years.

ZecOps, a San Francisco-based mobile security forensics company discovered the issue whilst investigating a sophisticated cyber attack against a client in 2019.

Apple has said they have fixed the issue with their Mail App. To activate the hack a black email was sent that would trigger a crash and reset of the operating system, this then opened the door to the hackers to steal your data.

For three nights violence has flared up between youths and police in the northern suburbs of Paris. The violence has been caused by the growing tensions in the strict lockdown to halt the spread of coronavirus.  An “explosive cocktail” of poverty, harsh police tactics, unemployment,  the health crisis has worsening has led to the violence. 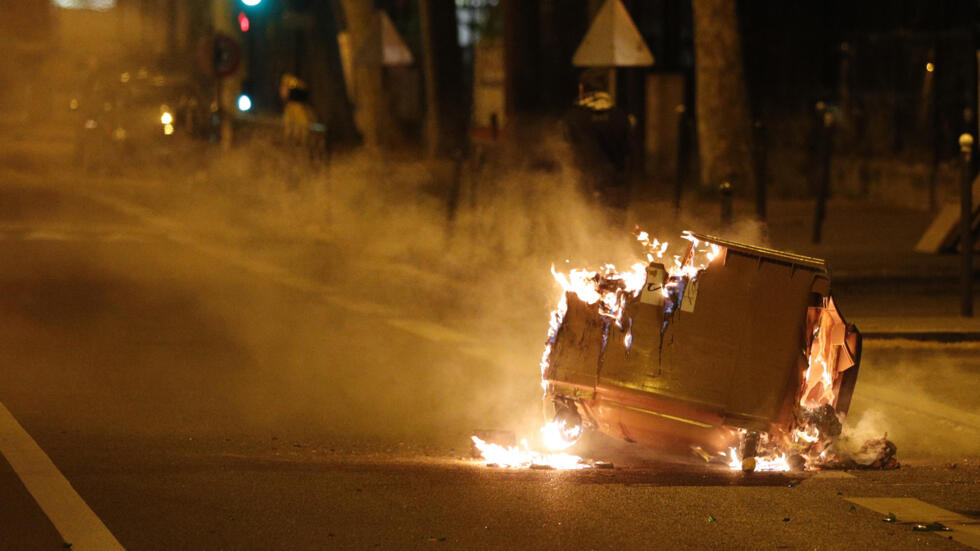 The neighbourhood has seen much violence in recent years. The area has a high African and North African population. Young black men are more likely to be stopped and searched by police, resulting a culture of animosity and distrust.

“When there are people out in the streets, police abuses are less likely to go unnoticed,” a local social worker explains. “But with residents locked up at home, the police have become more violent and arbitrary.”

He adds: “Of course, most officers do their work conscientiously. But it only takes a few bad apples eager to settle scores for things to get out of hand very fast.”

The poorer suburbs of Paris have been hit particularly hard by Covid-19. As health care provision is poorer in these areas.  Residents are angry as it is workers from these working class areas who have kept the city functioning. Many wealthy Parisians have fled the city, or are working from home.

“Nurses, cashiers, caregivers, street cleaners, security agents, delivery men… Basically all the people who prop up the country today, all those who hold the front line and put themselves in danger, they come from the working-class districts, from [Seine-Saint-Denis]!” said Stéphane Peu, a local communist lawmaker, in an interview with Le Monde.

Prof.  Elizabeth Bartholet a law professor at Harvard has called for a “presumptive ban” on homeschooling saying it is “dangerous”.

“The issue is, do we think that parents should have 24/7, essentially authoritarian control over their children from ages zero to 18?” Bartholet asked. “I think that’s dangerous. I think it’s always dangerous to put powerful people in charge of the powerless, and to give the powerful ones total authority.”

Batholet also went on to argue that homeschooling was a “ticking bomb”, a breeding ground for white supremacy. She argued that the removal from the public school system was against the human rights of the child and a threat to democracy.

“Many homeschool precisely because they want to isolate their children from ideas and values central to public education and to our democracy. Many promote racial segregation and female subservience. Many question science. Many are determined to keep their children from exposure to views that might enable autonomous choice about their future lives,” she claims.

She is also concerned about the majority of homeschooling families being religious.

“[S]urveys of homeschoolers show that a majority of such families (by some estimates, up to 90 percent) are driven by conservative Christian beliefs, and seek to remove their children from mainstream culture,” Harvard Magazine warns. “Bartholet notes that some of these parents are ‘extreme religious ideologues’ who question science and promote female subservience and white supremacy.”

Her essay fails to consider the many studies into the educational and social benefit of homeschooling. And provides no proof that homeschooling leads to an increased risk of child abuse, racism or white supremacy.