Secretary of State  Pompeo has said in a recent address that the Chinese are seeking to infiltrate and influence state and local politics.

“While there are places we can cooperate, we can’t ignore China’s actions and strategic intentions. If we do, we risk the important components of our relationship that benefit both countries,” Pompeo said. “The Chinese Government has been methodical in the way it’s analyzed our system, our very open system, one that we’re deeply proud of. It’s assessed our vulnerabilities, and it’s decided to exploit our freedoms to gain advantage over us at the federal level, the state level, and the local level.”

The virus has spread from the Chinese city of Wuhan and has seen more that 300 people taken ill, with six deaths. The virus is believed to have originated in a market selling seafood, where live animals are also present. It was confirmed the virus can pass from person-to-person. 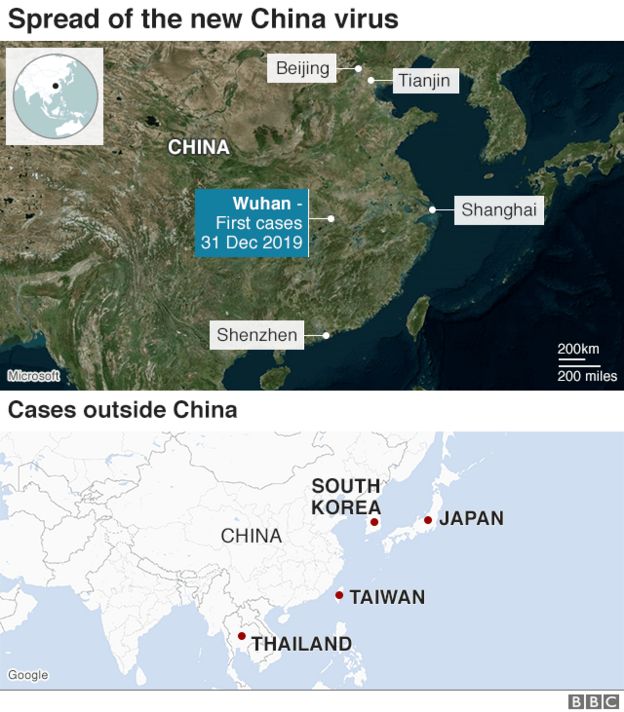 Private gun ownership is a tradition from the early days at the founding of the US. In a modern society, the problems created by this tradition have already exceeded the benefits. …

American society has already seen serious problems caused by the private ownership of guns, but their massive number has contributed to an enormous inertia. Many interest groups have benefited from it and some ordinary people have truly gained a sense of safety. To change this habit which has lasted hundreds of years, tremendous political courage and a rearrangement of interests is required.

Facts have proved that the US system is unable to handle the intricacies of countless issues around guns including politics, economics, law and order and public psychology. The country can neither manage the safe storage and use of so many guns owned by ordinary people, nor can it establish a new national system that bans or strictly restricts guns. It cannot even form an overwhelming opinion regarding gun issues.

Ironically this attack on the U.S. Second Amendment has come amid protests in Hong Kong. There Chinese citizens are calling on their own rights to protect themselves against government’s violent control. China has also being facing international condemnation for it’s treatment Muslim minority Uyghurs, who are being lock away in communist concentration camps.

Russia, with the backing of China, has had a resolution passed to see the establishment of a panel to look at the use of the internet for illegal purposes. The panel will work to set up “a comprehensive international convention on countering the use of information and communications technologies for criminal purposes,” the resolution said.

However the US, Europe and other western nations fear the purpose of any restrictions would be to limit freedom of speech.

“It is precisely our fear that (a new convention) would allow the codification at an international and global level of these types of controls that’s driving our opposition and our concerns about this resolution,” a US official said.

Human Rights Watch called the UN resolution’s list of sponsors “a rogue’s gallery of some of the earth’s most repressive governments.”

The countries who have backed the resolution have a history of repression of free speech, and actively try to restrict their citizens access to the internet. China for example blocks internet searches they deem harmful to their regime. India cut off the internet to muslim-majority Kashmir earlier this year; and Iran took most of their nation off-line for a time amid protests.

Iran, China and Russia have held joint naval drills in the Gulf of Oman and the Indian Ocean. The operations come at a time of increased  tension between the US and Iran. In  May last year the US withdrew from the nuclear deal signed by Obama.

“The message of this exercise is peace, friendship and lasting security through cooperation and unity… and its effect will be to show that Iran cannot be isolated,” Rear Admiral Gholamreza Tahani said on state television.

Iranian State television said the co-operation between the nations signals  “the new triangle of power in the sea”.

Japan also said on Friday it would send its own battle ships to the region to aid security, but would not join a US-led collision. The Japanese Chief of Cabinet said  “Japan’s own measure aimed at peace and stability in the Middle East as well as ensuring safety of Japan-related vessels,”

90% of Japan’s crude oil comes from the region.

China’s social credit system has been used to control private citizens in alarming ways. Now businesses are training staff on how to avoid falling victim to it.

A problematic aspect of the scheme is if a company is blacklisted then another company doing business with that company will receive negative marks against it. Thus the affect can domino down the business network.

Foreign companies have been warned already by China, specially US companies and anyone who has criticised Chinese government treatment of Uyghur Muslims.

A report conducted by Dezan Shira & Associates into the effects of the system concluded that businesses working in China:  “undertake a supply chain audit and conduct due diligence on business partners given the inclusion of partners in social credit assessments.”

“Businesses should also not forget to assess their IT and data security strength since they will need to transmit data to the government more frequently and in greater numbers,” the authors added.

“Sorry, but I do not wish you a good Ramadan,” wrote the head of the Uighur Institute of Europe in Paris, in a cri de coeur railing against Muslim countries’ indifference to the plight of Uighurs in China’s far-western Xinjiang region, published by French weekly L’Obs in May.

In the UN there has been a divide between those condemning China and those who have not. Western nations like the US and UK have condemned the treatment of Uighurs. However many Muslim nations have remained silent.

When contrasted by the unilateral condemnation of Myanmar for its military crackdown of Rohingyas Muslims many might wonder why.

However, many Muslim nations like Turkey, Egypt and Saudi Arabia have highly valuable trade agreements with Beijing.

“There is less solidarity than there is for the Palestinian or Rohingya causes,” noted Sophie Richardson, director for China at Human Rights Watch. “China has managed to win these countries’ support because they need Chinese investment.”

The document includes rules and guidelines for the camp:

The documents reveal how every aspect of a detainee’s life is monitored and controlled: “The students should have a fixed bed position, fixed queue position, fixed classroom seat, and fixed station during skills work, and it is strictly forbidden for this to be changed.

“Implement behavioural norms and discipline requirements for getting up, roll call, washing, going to the toilet, organising and housekeeping, eating, studying, sleeping, closing the door and so forth.”

Inmates will only be released after it can be proven they have transformed their behaviour and ways of thinking. The Chinese government  had said the camps were voluntary education programs.

However the documents also show details like in 2017 15 000 people were detained in the camps in one week alone.

As telecommunications companies roll out 5G, China and the US are already urging companies to begin working of 6G.

The race to faster wireless connections are needed for the innovations in driverless cars and augmented reality. Especially as current bandwidths are clogged by the shear volume of data we are sending.

These technologies are already a point of tension between the US and China. The US have banned Huawei from using their equipment in the US 5G infrastructure after it was found that Huawei rerouted data through Chinese government servers.

It has been reported the Iran will soon hold a joint naval drill in international waters with China and Russia. The exercise will be held in the north Indian Ocean.

The announcement came after the US announced they will be sending a moderate number of troops to the Gulf region. This is in response to attacks by Iran on Saudi Arabia’s oil facilities.

Trump’s policy on dealing with  Xi Jinping ’s China has seen Chinese tech firms placed on an “entry list”. This has stopped US firms doing business with these Chinese firms, and thus hampering their ability to advance Chinese development of AI and machine learning.

However, Trump is keen to strike a trade deal before the next election. This could see him remove Huawei from the entry list, as part of a future deal. This could prove disastrous to the US economy long term.

The Chinese- US trade war has seen US actors axed from Chinese productions. The Chinese film market has seen tremendous growth in recent years, and many US actors have flocked to the country to fill roles in films as foreigners. However, Chinese agencies have been axing these actors from their books.

“My agency in China ended our contract claiming the trade war with America amounts to force majeure. I can only assume it looks bad for them to be working with an American,” said Matt William Knowles, who was cut from a $75m project last month.